Posted Fri , Jun 25th, 2021 at 12:32 pm
by Ruby Lane
From the middle of the 20th century on, dolls depicting the public's favorite television characters became a staple of the toy industry. For doll collectors these characters recall happy childhood hours of play and television viewing and comprise an interesting focus within our collections.

In the 19th and early 20th century toys were advertised primarily through magazines and newspapers. These ads were aimed at the adult buyers who would be choosing toys for their children. But in the early 1940s everything started to change as television became the new medium for home entertainment, a development that would have a major impact on the toy trade.

On April 30, 1952 Mr. Potato Head made history by becoming the first toy advertised on television. This groundbreaking campaign was also a new concept as it marketed the toy directly to children. Once the floodgates were opened, television would become the top medium for toy companies to present new dolls to young viewers.

Children’s shows which had gotten their start in the late 1940s and early ’50s with shows such as the Howdy Doody Show and the Ding Dong School became a match made in heaven for toy company sponsors. Not only were toys advertised on these shows but a wide range of toy products based on television show characters soon found their way into the toy lines of large and small manufacturers.

Throughout the 1960s, ’70s, ’80s, and on into the 21st century a vast number of dolls have been made depicting out favorite television show characters. Some of the many dolls eagerly sought by collectors include:

The Flying Nun by both Hasbro & Horsman

The Waltons by Mego

The 6 Million Dollar Man and the Bionic Woman by Kenner

The Fonz by Mego

Mr. Kotter and the Sweathogs by Mattel

Sabrina the Teenage Witch by Kenner

Jem & The Holograms by Hasbro

Any way you view it, television and doll collecting are both a record of the social history of the past eighty years and a fun area to pursue as collectors! 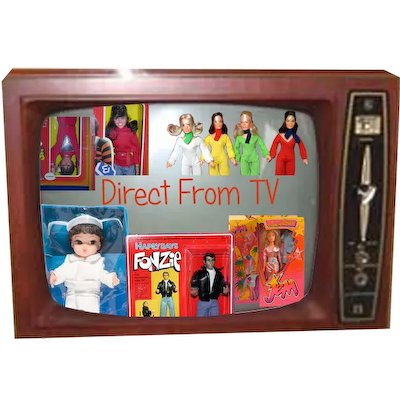