As collectors know, toys reflect and record the history of the world and dollhouses abound with a broad range of lighting fixtures both of the times in which they were created or of the past as miniature room settings look back to earlier times and styles. The cabinets and houses for adult collectors of miniatures of the 16th through 18th centuries included candlesticks and candle chandeliers to complete their room settings. By the 19th century dollhouses were moving more toward the nursery and many European toy companies began to offer specialized dollhouse furnishings. These items include candle holders of many designs.  German makers such as F.W. Gerlach which offered pewter miniature candle fixtures and Erhard & Söhne who made ormolu (metal gilded with gold-tone) fixtures in a wide range of styles both offered their products throughout the 19th  century and into the 20th. Many large companies and smaller artisan studios continued to offer candlesticks and other candle fixtures through the remainder of the 20th century and on to the present for miniature enthusiasts to employ in recreating dollhouses and room settings of any era.

By the later years of the 19th century electric light was coming into real life and dollhouses were not far behind. In America Tynietoy of Providence RI, which began offering its line of dollhouses and furnishings in a limited way in the late 1910s (first appearing in the city business directory in 1920) offered its dollhouses in both electrified and non-electrified versions. The company also offered a range of floor and table lamps for their houses which again came electrified or non-electrified.

Toy companies such as Schoenhut of Philadelphia offered wooden furnishings including lamps, for their dollhouses from 1928 to 1934. These room sets included non-electrified lamps. Other makers of wooden dollhouse lamps through the 1940s and ’50s included Kage Company of Manchester, CT., Rapaport Bros. of Chicago’s Nancy Forbes line, and Strombeck-Becker Manufacturing of Moline, IL. Many of these products were sold through the catalogs of companies such as Sears, Montgomery Ward and Spiegel.  British and German-made dollhouse lamps and other lighting fixtures were available in the American market as well during this period.

Moving into the late 1940s and on to the ’50s and ’60s some wooden dollhouse lamps continued to be offered but metal dollhouses filled with hard plastic (and later soft plastic or vinyl) furnishing became the popular toys of their time. Companies such as Louis Marx & Co. (NYC), Ideal (NY), the Superior line by T Cohn Inc (Brooklyn, NY), Renwal Manufacturing Co. (Mineloa, LI, NY), and the Wolverine Supply and Manufacturing Company (Pittsburgh, PA, later known as Wolverine Toy Company) are just a few of the entries into that market. The lamp styles used in these metal houses of time capsules of mid-20th century design.

In the 1970s interest in collecting miniatures and building dollhouses experienced a resurgence in popularity. Adult collectors clamored for lighting details to complete dollhouses and room boxes of all periods imaginable. Everything from candles to working electric lighting poured onto the market from both established companies such as the import firm of Shackman of NY which offered recreations of many dollhouse candelabras, oil lamps and other furnishing from the 19th century.  Miniature artisans established organizations such as the International Guild of Miniature Artisans (IGMA) and the National Association of Miniature Enthusiasts (NAME) to bring their highly detailed miniature lighting pieces to a broad market and to further promote the hobby of miniature collecting.

Dollhouses for child play and for collectors continue to be of great interest a quarter of the way into the 21st century and the miniature candles, chandeliers, and lamps of the past 2 centuries are the perfect way to add a little light to any miniature setting.

Dee Snyder, various articles for her column the Collectibles in Nutshell News magazine, 1987 thru 1990 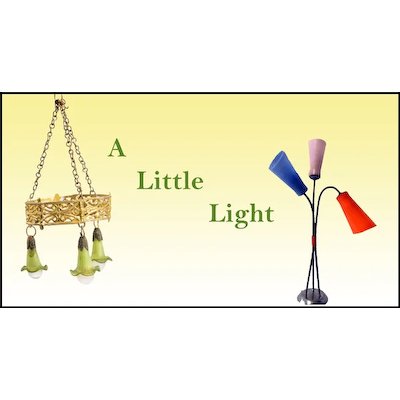