From August 2020 through July 2021, I had the opportunity to live near family in North Georgia. Having lived almost ten years in New York City, I was excited and intrigued by this chance to live in a cabin in the Blue Ridge Mountains of North Georgia. The excitement and intrigue of living in the mountains were piqued even more when I realized that we lived down the highway, Highway 129 in Cleveland, Georgia, from the world headquarters of the famous Cabbage Patch Kids.

Babyland General is in Cleveland, Georgia, a community that grew from the logging industry of the 19th century, and from 19th century gold mining during the Georgia Gold Rush. The area is also known for artisans who for decades have used the red Georgia clay to make pottery “face jugs,” folk art creations that were versatile and useful, and also whimsical.

Babyland General sits on a few acres of perfectly manicured lawn; admission is free, and they are open every day of the week, except for holidays. When we visited in July of 2021, the entrance had a sign informing us that masks were required because “Our babies are not vaccinated.”

Babyland General is an impressive structure, a very large white building designed to look like a country hospital, with rocking chairs outside on a porch that extends and wraps around most of the building. When you enter Babyland General, the first room is a museum showing some of the earliest dolls, which were an arts and crafts project by artist and Cabbage Patch Kids founder Xavier Roberts. The museum has photos of the first Babyland General, which was actually an old doctor’s office near the Cleveland town square, which Roberts converted into a workshop and toy store. The museum section of the hospital also includes displays of early dolls, photos of the evolving and growing Babyland General team, photos of celebrity fans, and it follows the success of Roberts’ artistic dolls at North Georgia arts and craft fairs, all the way through to the 2010 creation of the current Cabbage Patch Kids factory, offices, museum and headquarters called Babyland General.

For some background on the Cabbage Patch Kids, artist Xavier Roberts originally made the dolls, called “Little People” at that time, using an antique style of needlework from Germany, called needle molding. My family in the area actually remembered seeing Roberts in the late 1970s, selling the dolls at local arts and crafts fairs in nearby Sautee Nacoochee, the art hub of North Georgia. The dolls were a hit, highly sought after by parents for their children, and the limited supply could not keep up with the accelerating demand. Come 1981, media such as The New York Times, Newsweek, and the local Atlanta Weekly discovered Roberts’ “Little People” and wrote about the excitement and appeal that surrounded them. In 1982, in partnership with toy giant Coleco, Roberts’ newly named “Cabbage Patch Kids” were sold to a much wider audience, and became the object of Christmas buying crazes of the early 1980s, with parents standing in lines for hours for a Cabbage Patch Kid. The craze and popularity continued, and in 1985 a Cabbage Patch Kid took a trip on the Space Shuttle; in 1992 they were the official mascots of the U.S. Olympics Team, and in 2000, the Cabbage Patch Kids were honored by the United States Postal Service with their own commemorative stamp.

Today, that excitement lives on at Babyland General. After the museum section of Babyland General, you are led into rooms where current dolls can be found “in situ,” in cribs, and on beds as if in a child’s bedroom. What stopped me during the tour was when I recognized two works by Andy Warhol hanging on the walls, each depicting a respective doll. I was very familiar with Warhol’s works in pop culture and his commercialism art, but to see “Andy Warhol vs. Cabbage Patch Kids” in North Georgia was a rare treat, and at the very least is worth the trip.

After the rooms with the dolls in contemporary bedroom settings, the tour takes you into a large gallery room with the main attraction, the famous Magic Crystal Tree that throughout the day gives birth to new dolls. The tree is the background of a stage, surrounded by large quartz crystals growing alongside large heads of cabbage, with doll heads emerging from the cabbages. At intervals throughout the day, visitors get to watch the tree give birth to a new Cabbage Patch Kid. We were very lucky with the timing of our visit because from behind the tree appeared a nurse, possibly a midwife, who summoned all the visitors to gather around the tree because she was ready to give birth!

The nurse, or midwife, walked the crowd through all the steps of the birth, told a delightful story of how the tree needed a shot of “imagicillin” to help her with the final stages of the birth and had the crowd breathe in and out slowly together to help support the tree. We were also urged to say out loud if we were hoping for a boy or a girl. Then from below, the nurse held up a newly born Cabbage Patch Kid! My surprise and delight at all this continued when the nurse asked the audience for a first name and a middle name for the baby girl. After the crowd replied and yelled back with a variety of names, the nurse turned to two young ladies who were near the front, and asked each young lady to provide a name for the new baby girl, (somewhat risky in my opinion), and the first name was “Lilly,” and the middle name was “Jane,” so we all welcomed with applause the new Cabbage Patch Kid, “Lilly Jane.”

After that excitement, which I would consider the main event at Babyland General (do not miss it!), we continued touring the gallery where the crystal tree stood, as it is also a toy store for dolls, accessories, and Babyland General souvenirs. Off this main gallery, there is one more large gallery where Christmas is celebrated every day. It is filled with almost twenty different Christmas trees, from traditional trees to contemporary and special themed trees, each one with Cabbage Patch Kids and toys underneath them. We also found another room, an office, where the adoption counselor can meet with you, should you choose to adopt a doll that day from Babyland General; you sit across from him or her at their desk, going over the paperwork and birth certificate, and the responsibility of adopting a Cabbage Patch Kid.

We found all the staff to be charming, professional, and very proud of the Babyland General experience. They make you feel like you are in a special place, and the opportunity to adopt a doll or acquire any doll accessory is a very happy occasion. Should you be in North Georgia, you will find Babyland General a joyful way to spend an hour or two, again be sure to wait for the birth of a doll, and expect to be charmed and delighted. 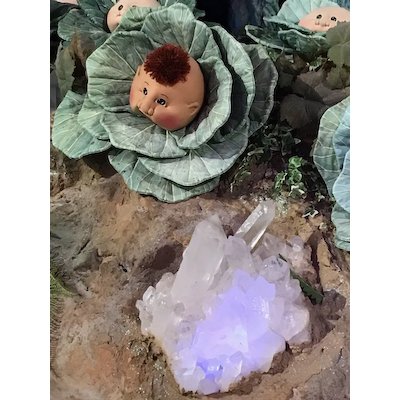