Why We Need Dolls In Our Lives

Why We Need Dolls In Our Lives:  No culture has been without dolls. In some societies, the doll figures that remain seem to be more idol or ritual figures, but the same cultures refer to dolls as children’s toys.  They might be very simple compared to their idols or decorative figures, maybe a decorated twig or bit of cloth, but they serve children as dolls. Dolls serve all kinds of functions for adults, too, and tell us about the cultures of people who no longer exist.  They inspire artists and musicians, decorate crèches and other religious institutions, help solve crimes, and serve as our memorials and portraits. 1.    Therapy Dolls: For many years, dolls have been used to help abused and criminalized children to cope with their trauma; children would point on the dolls where they had been physically hurt. Other dolls and dollhouses were the tools by which children told what had happened to them. Many organizations give out dolls and teddy bears as ways to comfort children who have been the victims of crimes and natural disasters. Currently, dolls are used in therapy with dementia and Alzheimer’s patients.  Many collectors enjoy donating dolls to nursing homes because they give the residents so much pleasure. Dolls are used in the medical field as anatomical models to teach healthcare professionals.  Martha Chase made life-sized dolls for hospitals so that nursing students could practice on them. Some nursing students called these dolls “Mary Ann Chase.” 2.    Dolls Solve Crimes:  In her book Dolls and Doll Makers, Mary Hillier shows a photograph of a group of penny wooden dolls arranged as the bodies in a murder had been. In the late 30s, these dolls were used in a murder case to recreate the crime.  Frances Glessner Lee, the heir to the International Harvester fortune, created dollhouse scenes of unsolved crimes called The Nutshell Series of Unexplained Death to help train FBI agent. They were inspired by The Thorne Room, and are still studied today.  Lee’s creations are the basis of the film by John Waters and Susan Marks, Of Dolls and Murder. 3.    Teach Tolerance:  To paraphrase the host of a popular Public TV travel show, [who’s paraphrasing Mark Twain], a collection of ethnic and international dolls is fatal to prejudice and racism.  These dolls, even the tourist variety, introduce us to other cultures and traditions.  They are invaluable in teaching cultural geography to children.  The Milwaukee Public Museum showcases their collection of these dolls by including them in life-sized settings of homes typical of each country.  The Strong National Museum of Play has wonderful examples of the souvenir dolls, and of international dolls displayed in the appropriate miniatures settings from their own countries.

4.    Teach Parenting: In an episode of The Nanny, starring Fran Drescher, twin mechanical babies appear to teach Fran and Max how to care for twins.  Recently, the same type of doll was used in The Middle, starring Patricia Heaton. Animatronic baby dolls are used all over the country to teach kids the responsibility of having and raising children. Dolls teach kids to nurture and to be kind.  They are good parenting practice for boys and girls. Taking care of stuffed animals teaches them to care for pets later, and to have compassion for domestic animals and wildlife. Managing the affairs of a dollhouse helps with the preparation later to run a real household. Collecting dolls teaches all the skills mentioned here, and also helps kid manage their allowance as they learn to budget for things that they want. 5.    Importance of Play: Interactive Children’s museums all over The United States feature exhibits on the importance of play.  Play is conducive to teaching children future roles, but also to help them generate ideas that will help them later in their careers. Famous space scientists and physicists first got interested in their fields through space toys and through making their own models. Many action figure designers got inspired from doodles they made as kids.  When children play house, school, restaurant, even war their dolls, they are thinking about the world around them and trying out roles they may want to try later in life.  The Bronte children were fond of a box of toy soldiers.  They wrote stories about the soldiers’ adventures and create small books that they bound for themselves.  These stories served them well later in life; all became writers and/or artists of various types.

6.    Preserve Culture: From the dawn of time, dolls reflect the cultures and histories of their eras.  Many cultures that would have otherwise vanished from the globe exist through their dolls and their doll making techniques.  Regional traditions around the world are reflected in the dolls that come from around the world. To read more about dolls it this capacity see Laura Starr, The Doll Book (1908) and G. Stanly Hall and Caswell Ellis, A Study of Dolls (1897) 7.    Model Fashion:  From the first Venus figure with her cornrowed hair, dolls have been used to model fashions.  King Tut even had his own mannikin so that his clothes could be tailored and then modeled.  As early as the 11th century, European royalty sent wearing the latest fashions to teach other.  Anne of Brittany was involved in sending these dolls.  Pandoras were dolls that were sent around to show the latest styles; some were two dimensional and painted on dummy boards. Paper dolls were also used to demonstrate styles and they still are.  Alexander McQueen has used dolls in their fashion exhibits, and Lacroix was involved in creating doll fashions for A. Marque and others. Louis Vuitton made accessories for fashion dolls. French fashion dolls with extensive wardrobes modeled all the latest trend, even as they served as toys for wealthy children.  Dickens’ Jenny Wren of Our Mutual Friend made a living outfitting them and repairing them. More recently, fashion designers have turned to dressing dolls, especially Barbie. Bob Mackie, Byron Lars, Donna Karan, Mary Quant Billy Boy, and many more designers have created outfits for dolls, including Barbie, but also Quant’s Daisy, Gene, and a host of Tonner creations.

8.    For Art:  David Levinthal, Hans Bellmer, Niki de Saint Phalle, P. Buckley Moss, Leonardo da Vinci,  Margaret Keane, Picasso, Degas, Dina Vierny, Joseph Cornell, Thomas Nast, Rose O’Neill, A. Marque, Grace Drayton, and Grace Storey Putnam are just a few of the artists involved in using dolls in art.  Organizations for doll artists, including N.I.A.D.A, the National Institutes of American Doll Artists, have raised dolls to an art form. Art inspires dolls and vice versa. Picasso created “Le Demoiselles de Avignon” after visiting a doll museum.  Degas used a bébé as a model for his “Little Dancer.” Frida Kahlo has inspired dolls, but she loved them and had her own collection.  She liked broken dolls she could fix; she saw them as an analogy for her own extensive injuries and afflictions.  She also included them in her paintings, like “Four Inhabitants of Mexico.” 9.    Study Textiles: People who study cloth and textiles study and collect dolls.  Barbie’s wardrobe, alone, tells the story of fashion from 1959 to the present.  Ethnic dolls are often made from hand-woven materials.  Asian dolls wear beautifully designed silk, sometimes hand embroidered and painted. Norwegian dolls show the elaborate hardanger stitch and early Huret dolls often were outfits with soutache braiding. Native American and some African dolls display intricate beading. Tribal peoples from both cultures excel at weaving and creating materials and designs, including Batik and dyeing fabric. For more on dyes, read Monica Ferris cozy needlework mystery, And then you Dye. Native American dolls made of cornhusks and other natural materials also represent folk arts and crafts. One can’t study fashion design without dolls.   Fashionista Iris Apfel’s recent book is a study in how the textile industry works, and the colorful illustrations picture her with plush animals, nutcrackers and statues. 10.     Just Because we Like Them! A character in Elizabeth George’s novel of suspense, What Came Before He Shot Her, collects whimsical character teapots because they make her smile.  We all need something to make us smile and divert us from the slings and arrows of earthly fortune.  Dolls fit this niche perfectly. Simply put - the quality of our lives are enhanced because dolls are in it! About the Guest Blog Author: Ellen Tsagaris has collected dolls since she was three years old. She has made dolls, priced dolls, repaired, dressed, and studied dolls. Besides dolls, she has studied other antiques and collectibles at museums, antiques shows, auctions, and flea markets since she was in grade school. She has set up at craft shows and presented papers on dolls and their history at the Midwest Modern Language Association.  She is the author of several articles on dolls that have appeared in Doll Reader, National Doll World, Doll Designs, International Doll World, Hope and Glory, Doll News, Adventures, and The Western Doll Collector. She is the author of two books about dolls, Bibliography of Doll and Toy Sources and With Love from Tin Lizzie; A History of Metal Heads, Metal Dolls, Mechanical Dolls, and Automatons.  An active blogger, she features two blogs about dolls, Dr. E’s Doll Museum, and Doll Museum.  She lectures on dolls for various organizations and has displayed part of her collection in museums. Ellen is also the creator of the popular Facebook page, Doll Universe. 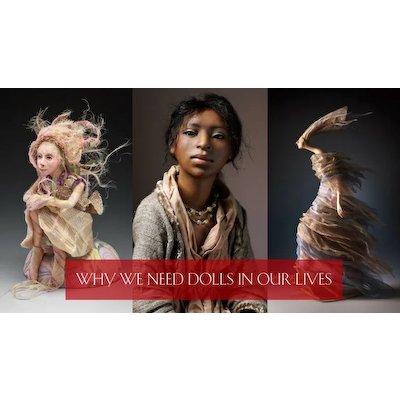