The Origins of the Ginny Doll

Posted Mon , Mar 29th, 2021 at 9:06 am
by Ruby Lane
The post- world War II era in the USA saw a time of relative peace and prosperity for much of society. Adults who had grown up in the shadow of the Great Depression and who had lived through the war years found themselves in a new world. There was a surge in commerce and home building and a baby boom was underway as people resumed their pursuit of the American dream. In Massachusetts a home-maker named Jennie Graves took her love of dolls and fashion, and created a doll company which would eventually develop one of the most popular dolls of the mid-20th century, Ginny.

In 1922 Jennie Adler Graves (born in 1890, married in 1913) was a young mother who enjoyed sewing for her children. One day an acquaintance asked if she would consider costuming some dolls for the benefit of charity. When she later learned that the dolls were in fact being sold for profit rather than for charity Graves decided that if she was making a marketable product, she should be the one reaping the financial rewards. So began The Vogue Doll Shoppe. From humble beginnings at her kitchen table, she began a business that would become one of the most successful doll companies in America.

Jennie did begin working from her home in Somerville, Massachusetts. Connecting with various doll companies working through the wholesale doll and toy magnate George Borgfeldt she purchased available dolls which she costumed in sweet little outfits designed and made by her. One of the earliest dolls she used was the "Just Me" mold manufactured by Armand Marseille (mold 310). She quickly became so busy that she asked a friend and then some of her neighbors to assist in the sewing of the doll outfits, establishing what would eventually become a vast network of home-workers. Her costumed dolls were sold in stores such as the Boston retailer Jordan Marsh. Graves would continue her business using a variety of dolls made of bisque, celluloid, rubber, cloth, and composition.

By 1937 The Vogue Doll Shoppe was selling an 8" composition doll, manufactured by the Arranbee Doll Company of NYC. Graves named this doll "Toddles." She went on to contract with the well-known doll sculptor Bernard Lipfert to sculpt a version of Toddles that more closely matched what she had in mind. Toddles was sold in various series depicting themes such as foreign lands, history, nursery rhymes, and fairy tales, among others. In 1939 Jennie's husband passed away and she moved to a new home in Medford, MA where she continued her business.

In 1941 Graves moved her business to a two-family house where she operated a storefront and had employees working on dolls and shipping. She continued to grow her workforce of home sewers. In 1942 Jennie's daughter Virginia joined the company as a designer.

In 1945 the name of the company was changed to Vogue Dolls, Inc and it continued to grow exponentially. With the wartime development of plastic materials, the stage was set for the debut of the little hard plastic doll that would become known as "Ginny." In 1948, using a sculpt by Lipfert, Graves contracted with Commonwealth Plastics to manufacture injection molded dolls for her company. By 1949 Vogue Doll Co had a large factory, as well as its network of home sewers, and was a booming business. Initially the new hard plastic dolls were sold under a variety of model names including a doll called Ginny. In 1951 a model of the doll featuring a new, styleable wig was widely promoted, this doll was called Ginny. By 1951/52 the name Ginny had caught on with retailers and the public and the Ginny doll was officially born as Vogue began calling all models of this 8" darling by that name. The Ginny doll and her ever-growing wardrobe would become the "must have" doll of the 1950s. In 1957 Vogue Doll Company sales were over 5 million dollars, in large part thanks to Ginny.

With Virginia doing much of the design work (married in 1954 to Stanley Carlson) Mrs. Graves could focus her attention to promoting her dolls and running the company. She was especailly adept at marketing, stimulating year-round doll sales. She created special promotional events such as the 1957 Hollywood party where celebrities were invited to bring their children to enjoy entertainment, activities and Ginny dolls, all of which was photographed and widely reported to an eager public. The Vogue Doll Co. also operated a Ginny Fan Club to keep young enthusiasts abreast of all of the Ginny events and products being offered.

Mrs. Graves retired from her business in 1960 turning over the reins to be shared by her son-in-law Edwin Nelson and her daughter Virginia Graves Carlson. In 1963 the company brought out a Ginny which had a vinyl head on a hard plastic body. These dolls had rooted hair, many featured a short "pixie" cut hairstyle. In 1965 the company moved to an all-vinyl version of the doll. Virginia would retire in 1966. In 1972 the company name was sold to Tonka Corp. which was to be the first of a number of successors to the Vogue Doll Company. Other successors were Lesney Products Corp. (1977) and Meritus Industries (1984). These companies strove to keep the Ginny doll legacy alive but through changes in public tastes and variations in product quality the Ginny doll fell out of favor with the buying public. In 1986 R. Dakin & Co bought the Vogue name and reintroduced a Ginny doll aimed as much to the growing collector market as to a toy market.

In 1995 the Vogue name was again sold to Linda and Jim Smith who revitalized Ginny's popularity, manufacturing dolls closer to the dolls of the 1950s. These found great favor with collectors and it seemed Ginny's future was once again bright. During the late 20th century many doll and toy companies which had formerly manufactured their products in the USA moved to manufacturing in foreign countries, this trend was followed by the new incarnation of the Vogue Doll Co. In 2014 Vogue became a victim of political and economic developments which led to the government of China suddenly closing the manufacturing plant and seizing all of the company's molds and products. Today visitors to the voguedolls.com site are greeted with a "for sale" sign. Whether a new version of Ginny ever returns to the marketplace is an unknown at this time but we are fortunate today have such a wide variety of dolls and charming clothing and accessories to enjoy collecting and to provide us with a happy image of idealized mid-20th century child-life in middle America.

Patricia Smith Through the Years with Ginny. Paducah: Collector Books, 1985 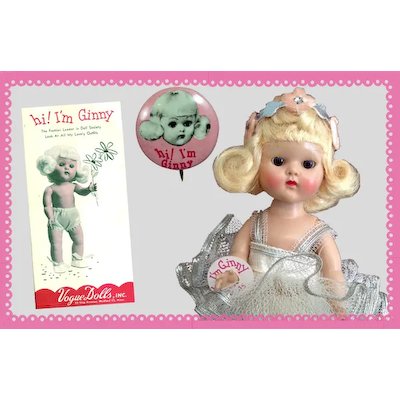