In Praise of the Dolly Faced Doll

Collectors and dealers alike are no doubt familiar with the phrase "it's a common German doll" used in reference to the many Dolly Faced dolls produced from the 1870s to the 1930s. But it behooves us to stop and consider why there are so many of these dolls, why they were made over such a long period of time and why they are in fact most often the first doll purchased by today's doll collectors. The simple answer is they are pretty dolls! The dolly faced dolls were loved and treasured by their original owners, often being found in contemporary photographs. Many of these dolls have been passed down through families. The emotion-neutral expressions of the doll's faces provided great play value as the child could imagine their doll in any mood or situation.

"Dolly Faced" is a collector term applied to dolls that have a pleasing and expressionless countenance. These dolls created in the thousands, by German (as well as French, English and American companies) were vastly popular with the buying public of their day as well as with the children who loved and played with them. Often made of high-quality porcelain bisque, sculpted by talented artists and painted by trained specialists they offer a window into the idealized beauty of the eras they were created in. They were created by all of the well-known porcelain doll companies of the era such as Armand Marseille, Kämmer & Rienhardt, Kestner, Simon & Halbig, and Cunno & Otto Dressel to name just a few.

Most collectors who have an interest in antique and vintage dolls enjoy the connection between their collecting passions and the study of history. The stories behind the items that we collect that are as interesting as the items themselves and the dolly faced dolls have much to say to us. Changes in painting techniques and body style used on these dolls tell us not only the tale of beauty of the past but also of societal attitudes and of the business concerns of their makers. The dolly faced doll was created in many sizes ranging from examples as small as 6" to 42". The Kämmer and Reinhardt (on left) and Kley & Hahn Walkure (on right) are about 32" tall.

The concept of beauty has varied from culture to culture since the dawn of time. Manufacturers making dolls for the Western world of the 19th and 20th centuries followed the trends in fashion closely in order to ensure their products would meet with the favor of the buying public. Today the concepts of fashion and beauty reflect the trends of the privileged classes in society, style standards are set by fashion designers and popularized by pop-culture icons. So too it was in the past, this can be seen in the bisque child dolls of the 1870s which tend to have pale complexions as the upper-class child did not labor in the sun. Toward the end of the 19th century upper and newly emerging middle classes took up outdoor recreations and were influenced by modern health discoveries, resulting in a healthy glow as being considered beautiful and desirable. Again, the bisque dolly faced doll mirrored these changes. Examples with black or brown skin tones lend additional interest to a display of dolly faced dolls. This example was made by Heinrich Handwerck. The basic Kämmer & Reinhardt dolly faced mold was used on a wide range of body types throughout the years of its manufacture. This diminutive example (6") of the 1920s- 30s is on the slim style of body referred to by the collectors of today as a "flapper-style" body.

Body types used on dolly faced dolls also kept pace with these changing attitudes. During the earlier decades of production composition bodies tended to be fuller, with fat little tummies and heavier arms and legs as "baby fat" was viewed as a sign of a healthy child with enough to eat. Moving into the early 20th century doll bodies tend to slim out and elongate partly in response to new concepts of what a healthy, active child should look like. Of course, from a purely economic standpoint, this made good sense for the manufacturer who could put a slimmer, longer body on its existing head molds and sell the resulting doll at the higher price of a taller tall. The dolly faced doll produced in vast quantities was also a doll priced to be affordable to the largest group of consumers. Today this translates to making good examples of these dolls more readily available to collectors, often at very affordable prices. They are also great fun for the enthusiast who enjoys sewing for dolls, allowing the collector to choose the size scale they prefer to work in and decade of fashion they would like to recreate. All of these historical, monetary and costuming considerations aside, the dolly faced doll is as previously stated essentially a very pretty doll. In a collection which includes character dolls and other unique items the dolly faced doll adds additional interest and balance to any display. Truly, variety is the spice of life and the dolly-faced doll has earned a place of honor in any collection of antique dolls. Resources for today's doll costumers include contemporary materials such as this page from a 1905 edition of McCalls magazine, to fashion prints from sources like Godey's Ladies Magazine, to a wide range of modern patterns for antique dolls. Note the outfits in the upper right corner of this illustration which are for doll clothing! 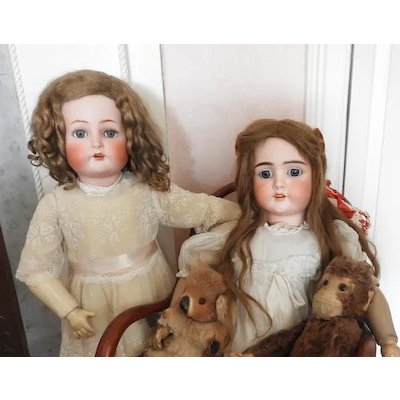