In Celebration of Izannah Walker Dolls This post is a celebration of the bicentennial +1 year of the birth of Izannah.  It’s fitting, I suppose, that this blogger once published an article on a walker inspired dolls she created also called “The Birth of Izannah.”  The article appeared in Doll Designs (House of White Birches) but is no longer in print.

Walker obtained a patent for her dolls in 1873, but she had been making dolls perhaps as early as 1828.  She was involved in her doll business until her death in 1886.  These dolls with their hand painted, oil paint features and resemblance to folk art inspired Martha Chase dolls later; apparently, Chase played with a walker doll as a child. The dolls had painted hair, for the most part, but black dolls with yarn hair have been reported as well.  There are also some boy dolls in existence.  Dolls were made in sizes of 15, 17, 18, 20, 21, and 24 inches.  Their heads were made of several layers of materials soaked in glue and pressed into an iron mold.  The finished head resembled the shoulder head of an early china head.  The bodies were sometimes stuffed with seagrass, local to Walker’s home.  The sources for this information comes from letters written by a letter by Mrs. Norman H. Robertson, who was a grand-niece of Walker.  The letter appeared in Philomena Hart's Column in the Providence Bulletin.   A doll collector named Mrs. Singsen started a correspondence with Norma Robertson, and part of the information from the Providence Bulletin was quoted in Janet Pagter Johl’s classic book, Your Dolls and Mine.  Also, Mrs. Lila Singsen’s dolls were photographed for Johl’s book.  See the Izannah Walker Chronicles.com for more information on this correspondence.  Johl’s book was published in 1952. Dolls are identified by provenance and method of manufacture. The Caucasian dolls are known for their iconic spit curls.  The dolls’ hands are also realistic with fingers, unlike many other antique cloth dolls whose hands look like mittens.  Some dolls photographed have stitched toes, others painted boots.  It’s never been clear to me if the dolls were actually marked.  Contemporary statements by Walker have been uncovered, but there is little information about the production records of the company itself.  Walker worked with her sisters, and it is said that the Walker family had a life-sized doll.   Most authors agree around 3000 dolls were made between around 1845 and the year of Walker’s death, around 1886, or some say, 1888. You can read an in-depth article here. Richard Wright and Maureen Popp owned them, and apparently, the late Sam Pryor did as well; one of the dolls photographed in Coleman’s encyclopedias are credited to his former doll library foundation.  A few hundred dolls have been photographed, but there are many articles, Internet sites, pattern books, and other books that are about Izannah Walker dolls or that include them.  The old dolls range in price from about $3000 to $41,000.  Many doll artists including Paula Walton, Gail Wilson, and Dixie Redmond (The Izannah Walker Chronicles) create them as well.

Izannah Walker left a remarkable legacy as a single woman entrepreneur and artist; she made many things besides dolls, but the dolls will always be her most famous legacy. Browse This Week's Arrivals on the Dolls Lane 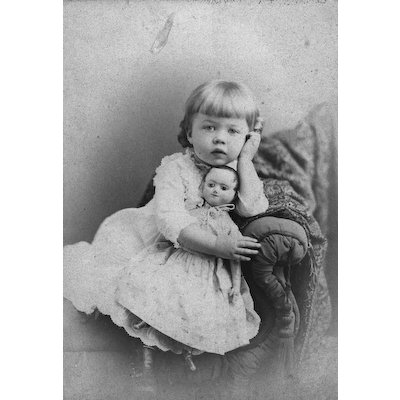