Posted Tue , Jun 23th, 2020 at 9:00 am
by Ruby Lane
Dolls with molded hats have been made of many materials through the years and can be a fascinating niche in the world of doll collecting.

The search for dolls exhibiting rarity factors can be an interesting and challenging pursuit for the collector. One special niche which cuts across the various mediums used in doll making of the past two centuries is that of the bonnet-head doll. These dolls are beautiful and often complicated in their design and stand today as tangible records of headwear fashion.

Among the earliest examples today's collector can hope to find are those made of china. Dolls with other characteristics such as pink-tint skin-tones and sloping shoulders arrived in the marketplace of the 1840s. The molded and painted hats on these dolls can range from simple, smooth caps decorated with painting, to elaborately molded bonnet styles.

Other early examples within this genre include those made by the German paper mache doll makers of the mid-19th century. The Lowenthal & Comp. of Hamburg began making dolls in 1836 and exhibited their products at the 1844 Trade Exhibition in Berlin. Some of their dolls had features such as glass eyes and glass teeth. A style of paper mache doll with a smooth bonnet coming to a peak on the forehead has been attributed to this maker. Examples have been found wearing the regional costume of the Vierland area located north of Hamburg, Germany.

The 1840s/50s catalogs of the firm of Kestner show a variety of paper mache female and male dolls depicting both adults and children which wear molded headwear.

Moving through the 19th century, bisque and so-called parian examples of bonnet-head dolls were made by a variety of makers including Conta & Bohme, Alt, Beck & Gottschalk, Kling, Simon & Halbig, just to name a few. These were made in a broad range of styles and sizes and included dolls with painted eyes and glass eyes.

From about 1885 to the 1910s Hertwig & Co of Kutzhütte, Thüringia, Germany offered bonnet-head dolls in a series representing International headwear styles. These dolls are often found on their original cloth bodies which have a panel of solid color fabric running the length of the front torso. The internationals included dolls depicting Cuba, Russia, the USA, and Italy among others.

Another series by Hertwig was a line of fanciful dolls wearing molded flowers and butterfly headwear. According the German research team of Jurgen and Marianne Ceislik these dolls referred to as "Margeurites" were made specifically for the American market. US wholesaler/distributers such as Lauer and Butler Brothers included these dolls in their catalog offerings from 1887 into the early years of the 20th century.

Through the remainder of the 20th century inexpensive bonnet-head dolls of composition, celluloid, hard plastic, and vinyl could be had from a large number of American, European, and Asian manufacturers and a variety of doll artists of the 1940s onward have enjoyed including dolls with molded headwear in their offerings ensuring that although bonnet-heads are much harder to find than dolls without molded hats they are worth the hunt and add an interesting and exciting dimension to our collections. 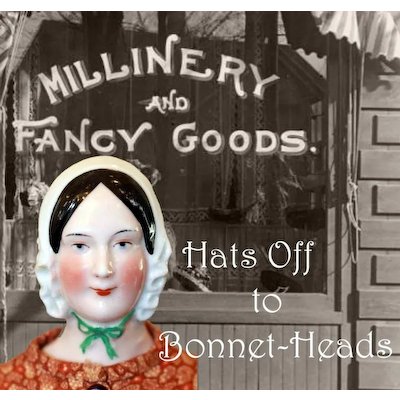