Dolls of the Seven Continents 1. North America:  North American has a rich history of dolls.  Dolls and clay figures from Mexico have been found in tombs, archaeological digs, and at the foot of volcanoes.  Fairly new research into Mexican doll making shows that as in Europe, entire families were devoted to making dolls.  Allegedly, the Emperor Montezuma had his own collection. Frida Kahlo and Diego Rivera were fond of dolls and Pre-Columbian figures.  Vargas was famous for wax dolls, and the Pierrotis and Montanaris may have had roots in Mexico, or in Mexican wax work techniques.

Beautiful dolls come from Honduras, The Dominican Republic, Cuba, and Haiti. Guatemala has contributed its worry dolls, which are themselves the stuff of folklore. Haiti and our own New Orleans, give us Voodoo Dolls. Native America dolls, especially the Hopi Kachinas, have an entire tradition and history of their own.  Cornhusk dolls have origins in Native American dolls, with excellent examples by The Cherokee and the Iroquois. The plains peoples left us beautiful dolls of buckskin and beadwork. The Zuni create entire dolls from seed beads. The Inuit people are famous for amulets carved in bone but also for dolls of wood, hide, and soapstone.  The doll making tradition is passed down from mother to daughter. Many American doll companies now dominate the toy industry, including Mattel, Madame Alexander, Remco, Galoob, Hasbro.  American creations like The Cabbage Patch kids created fads and shopping frenzies. Ideal gave us the iconic Shirley Temple and was instrumental in the development of The Teddy Bear. Antique and vintage dolls made by Izannah Walker, Greiner, Chase, Arranbee, Vogue, and others. American folk doll and ethnic dolls like those of Leo Moss are the darlings of many collectors. Many doll artists come from the United States as well, and American collectors founded the United Federation of Doll Clubs, UFDC.

2. South America:  Argentina has its own doll companies.  Costume dolls from Argentina are beautiful, and often wear long braids, white kerchiefs with aprons, and red printed dresses with ruffles. Brazil has lovely dolls, some presenting Carnival.  Columbia has figurines of clay, and some dolls represent villagers from various parts of the continent.  They are often made from natural rubber. The people of the Amazon create wooden dolls with painted designs on their bodies. Dolls from Bolivia are made of cloth and wear handwoven clothing.  Peruvian dolls have well-modeled clay heads and hand-woven clothing.  They represent the people who live in the Andes. Ecuador had schools for girls in the twenties where the students made soft sculpture dolls, and miniature tablecloths, doll clothes, and bed linens to demonstrate their needlework skills.  Painted cloth faces, hand woe clothing, straw hats, and wire armatures on wooden bases are typical of vintage dolls from Ecuador.  Elaborate dolls with resin heads and limbs are well sculpted and have human hair wigs.

3. Asia.  Japan, of course, celebrates The Girl’s Day Festival and The Boy’s Day Festival, both of which involve displays of dolls and their accessories.  Even mini fruits and vegetables are sold.  Japanese doll houses are famous, particularly those of Rumer Godden and Huguette Clark.  Dolls of all types have been part of Japanese culture since ancient times.  Doll artists in Japan are considered living national treasures, and there are temples devoted to them, as well as museums.  Collectors from Japan are among the most avid in the world.  Takara Barbie is a favorite, as are Hello Kitty dolls and figure, and various Manga characters. China has Door of Hope dolls, made at the Mission where Pearl Buck, noted author, worked.  Chinese opera dolls are an integral part of Chinese culture, as are the Bunraku puppets and Karakuri automatons of Japan. Dolls appear all over Asia and represent every culture and style of dress.  Korea has schools that teach doll making, as does Thailand.  Indonesia’s wooden dolls and Thailand’s cultural figures appear in museums, restaurants, and department stores. Ancient figures from these countries are made of clay, jade, porcelain, even gold.

4. Europe:  Italy has wonderful dolls, including those by Lenci, Furga, Migliorati, various puppets, Eros, and more.  In the late sixties, there was a fantastic doll shop near the Fontana di Trevi.  France, of course, is the home of Jumeau, Bru, Huret, Gaultier, Rohmer, Raynal, Corolle, and so many wonderful doll makers.  Petit Colin makes iconic French dolls of celluloid often used to model international and French regional costumes. Germany, home to Kestner, Simon & Halbig, Hummel, Goebel, Heubach, and so many more German Makers has been the doll trade since at least the 11th century, probably earlier. 5. Africa: Africa’s history of dolls, masks, and ancestor worship is time-honored and familiar among doll lovers and anthropologists.  Ashanti dolls from Ghana with their large heads and high foreheads are given to little girls so that they may have beautiful, intelligent children.  This doll inspired the international symbol for women. Dolls from Africa diverse and serve many purposes.  Some are idols, others fetishes.  They are made of leather, gourds, beads, wire, and iron, especially from Benin and Burkina Faso.  African dolls include dolls made in Israel and the Middle East.  Many dolls are carved from ebony and other woods native to the continent.  Great books that focus on African dolls include Carl Fox’s The Doll, Pam and Polly Judd’s African and Asian Costumed Dolls, and Max von Boehns’ Dolls.

6. Australia: Australia has a healthy history and culture of doll making and collecting. Bisque dolls are described in The Thornbirds, and a popular magazine is Australian Dolls and Bears. Bindi dolls are made there as well as toy Koala bears.  Dolls of metal are also particular to Australia. There are also dolls representing Bindi Irwin, daughter of the late Steve Irwin, a well as national costume dolls. 7. Antarctica: Various nations have camps in the seventh continent. While we can’t really say dolls per se are there; indeed those who work there have their share of mascots and stuffed animals, including a few small dolls, statues, or figurines. Eleven babies have been born there since 1978; you know that baby toys, stuffed animals and dolls were part of those nurseries. Since 2008, there have been active attempts to colonize the continent, which has no indigenous inhabitants. At least one horror writer has set a supernatural story involving doll in Antarctica.  The story is “Skin and Bone” by Tim Lebbon. It appears in The Doll Collection, an anthology edited by Ellen Datlow. Stuffed penguins, toy seals, plush whales, fish, and certain toy invertebrates of all kinds represent dolls from this still strange, cold, and unchartered place. 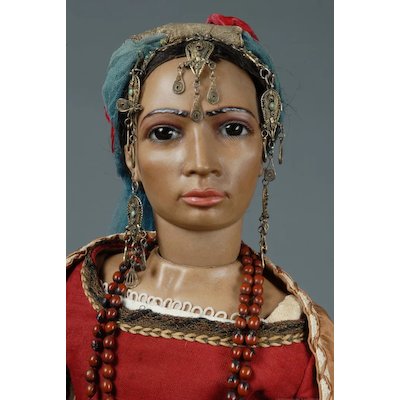